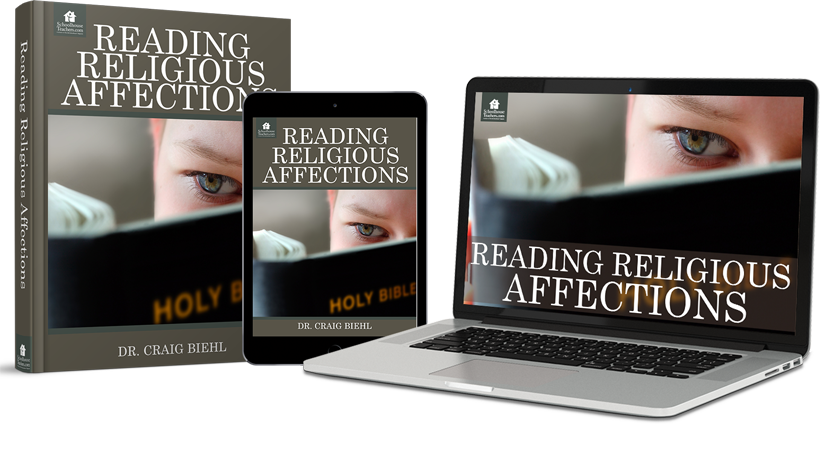 Who was Jonathan Edwards? What did he believe? Through twenty comprehensive units, Dr. Biehl answers these questions and more while studying Jonathan Edwards’ book Religious Affections. The Reading Religious Affections course challenges students to dig deeper into Scripture while examining the arguments raised in the book and pondering various questions and points for discussion.

PART ONE
Background, Nature, and Importance of Religious Affections

SESSION ONE
Introduction to Jonathan and Sarah Edwards

“The profoundest reasoner, and the greatest divine, in my opinion, that America ever produced.”

“He was, in the estimation of the writer, one of the most holy, humble and heavenly minded men, that the world has seen, since the apostolic age.”

“The Greatest, wisest, humblest and holiest of uninspired men.”

“Never was there a happier combination of great power with great piety.”

“Edwards was extraordinary. By many estimates, he was the most acute early American philosopher and the most brilliant of all American theologians. At least three of his many works—Religious Affections, Freedom of the Will, and The Nature of True Virtue—stand as masterpieces in the larger history of Christian literature.

“No man is more relevant to the present condition of Christianity than Jonathan Edwards … He was a mighty theologian and a great evangelist at the same time. … He was pre-eminently the theologian of revival. If you want to know anything about true revival, Edwards is the man to consult.”

“A visionary enthusiast, and not to be minded in anything he says.”

“The life of Edwards is a tragedy. … Because of his faith Edwards wrought incalculable harm. … a more repulsive individual never influenced history.”

“If he had lived a hundred years later and breathed the air of freedom, he could not have written with such old-world barbarism as we find in his volcanic sermons.”

“His philosophical insight was buried under the ruins of his religion. He failed to see the futility of insisting on the Puritan principles.”

3) What accounts for the difference of opinion regarding Edwards?

“Here is the fundamental reason why opinions on Edwards are so divided, and why his biographers should also differ so widely. The division runs right back to the Bible, and, depending on where we stand in relation to Christ, we shall join ourselves to one side or the other in interpreting this man who was, first of all, a Christian.”

If this Religious Affections study guide is completed in full, including all reading assignments and discussion questions, and the homeschool high school student spends approximately 90 hours completing the course, the course is worth a minimum of .5 credit.

Contemporary readers unfamiliar with Edwards’ 18th Century English have found Religious Affections an arduous read. Yet, the lesson designer believes that the greater difficulty reading Edwards is following the comprehensive and exacting nature of his arguments. Edwards’ definitions and explanations are meticulous and exhaustive, his sentences are long and weighty, while the logic of a single point can carry on for pages. Few contemporary readers are trained to think as carefully as 18th Century theologians, let alone one as profound as Edwards. His arguments are carefully and brilliantly crafted, but they require time and effort to grasp.

The following summary and outline of Edwards’ monumental classic was developed for application to a teaching setting to help address this particular need. The logic, flow, and structure of Edwards’ arguments are more easily seen in the format of a detailed outline. So designed, the study guide is intended to supplement, not replace, the reading of Religious Affections. Edwards chose his words carefully, so any summary or abridgment of his words will necessarily diminish the brilliance of his argumentation. Thus, Dr. Biehl hopes that this study guide will provide an additional aid to encourage the direct study of Religious Affections.

The Religious Affections study guide is divided into twenty teaching modules, with discussion questions following each module. As Edwards’ theological insights are as applicable today as they were at the time of its initial publication in 1746, the discussion questions are designed to help teachers and high school students apply them to their own heart and to contemporary Christianity in general. Scripture references are sometimes written out to expedite the pace of the study, while references listed without text allow teachers and high school students to look up verses to interact with their own Bibles as part of the study.

This homeschool Bible course for teens does not include gradable quizzes or tests. It includes numerous study questions that can be graded, if desired.

Two years after graduating from university, Dr. Craig Biehl’s life was turned right-side up from a…

A Different Kind of Bible Study

Bible Adventures (English and other languages)