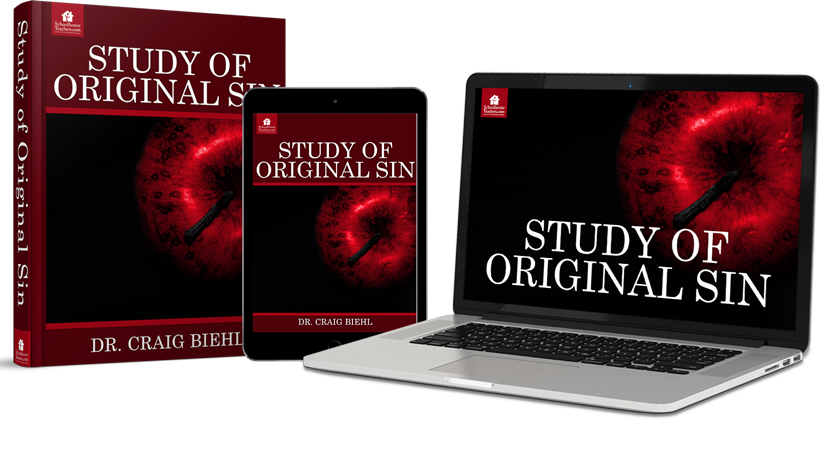 Does your student itch to learn more about the Bible? Do you find him or her having theological discussions with friends and family? If so, Study of Original Sin is a great course for you. Through these twenty-four thought-provoking sections, Dr. Biehl examines Jonathan Edwards’ work The Great Doctrine of Original Sin Defended, opens up many opportunities for discussion, and encourages students to dig deeper into God’s Word.

Getting Started with Our Study of Original Sin, a Christian Homeschool Bible Course

Course Sample for Our Study of Original Sin, a Christian Homeschool Bible Course

Christian Original Sin? The very words strike most 21st century ears as horribly outdated, overly pessimistic, and grimly medieval. After all, this is the era of the computer chip and the space shuttle. And haven’t the most learned psychologists and sociologists assured us that people are by nature good, having been turned to their evil ways not by some inner instinct, but through the influence of a deviant culture and substandard education?

Opposition to the doctrine of original sin, however, is far from a modern phenomenon. There is a longstanding history of disdain for the notion, perhaps beginning most famously with Pelagius and his resistance to all things Augustinian. One of the lesser known but decidedly more vocal and strident voices in objecting to the reformed doctrine of original sin belongs to John Taylor (1694-1761) of England. His views were made explicit in a volume he wrote in 1735 entitled, The Scripture-Doctrine of Original Sin. Certainly, the best testimony to the influence of Taylor’s work was that provided by Jonathan Edwards:

“According to my observation, no one book has done so much towards rooting out of these western parts of New England, the principles and scheme of religion maintained by our pious and excellent forefathers, the divines and Christians who first settled this country, and alienating the minds of many from what I think are evidently some of the main doctrines of the gospel, as that which Dr. Taylor has published against the doctrine of original sin.”

Taylor’s disdain for the reformed doctrine of imputation and original sin was grounded upon one foundational principle that he held to be inviolable: sin and guilt are entirely personal. One person’s sin is his alone and cannot be reckoned or charged to the account of another. Neither can guilt in any sense be corporate apart from the voluntary consent of all persons involved. “A representative of moral action,” said Taylor, “is what I can by no means digest. A representative, the guilt of whose conduct shall be imputed to us, and whose sins shall corrup and debauch our nature, is one of the greatest absurdities in all the system of corrupt religion.” Concerning Adam and eve, he insisted that as the sin “they committed was personal, done only by them; so also must the real guilt be personal, and belong only to themselves; that is, no other could, in the eye of justice and equity, be blamable and punishable for that transgression, which was their own act and deed, and not the act and deed of any other man or woman in the world.”

Taylor argued that only the person who has a “consciousness” of sin can justly be held guilty for it. It is absurd to suppose that an infinitely righteous God would charge with a crime persons who had no hand or choice in its execution, indeed, a crime committed before they even existed. Such is possible only on the “purely imaginary” supposition that one man’s consciousness, and therefore liability of guilt, is transferable to another. To charge God with such an act is “highly profane and impious.”

To read a full sample of this class, click here.

Transcript Information for our Study of Original Sin, a Christian homeschool Bible course

If this advanced Christian original sin Bible course is taken in full, completing all reading and writing assignments, and spending approximately 90 hours completing the lessons, the course is worth a minimum of .5 credit. If the homeschool high school student explores this course in depth and spends approximately 180 hours completing this course (two hours per day for eighteen weeks or one hour per day for thirty-six weeks), it will count for one high school credit.

Course Outline for Our Study of Original Sin, a Christian Homeschool Bible Course

Part One: Evidence of Original Sin

Part Three: The Redemption of Christ as Evidence for Original Sin

More About Our Study of Original Sin, a Christian Homeschool Bible Course

What is Christian original sin? Is man really born sinful, and if so, why? Is God fair to judge man for sin when he was born without the ability to be righteous before Him?

These are a few of the questions answered by Jonathan Edwards in his classic treatise, The Great Doctrine of Original Sin Defended. Though written in response to Dr. John Taylor’s arguments against the doctrine, Edwards’ classic was primarily written “as a general defense of that great important doctrine.” A proper understanding of original sin is fundamental to the Christian faith, as Edwards wrote:

I look on the doctrine as of great importance; which everybody will doubtless own it is, if it be true. For, if the case be such indeed, that all mankind are by nature in a state of total ruin, both with respect to the moral evil of which they are the subjects, and the afflictive evil to which they are exposed, the one as the consequence and punishment of the other; then doubtless, the great salvation by CHRIST stands in direct relation to the ruin, and as the remedy to the disease; and the whole gospel, or doctrine of salvation, must suppose it; and all real belief, or true notion of that gospel, must be built upon it (Works,I:145).

Download a complete course syllabus for our Study of Original Sin Christian homeschool Bible course including the course objectives, text, and requirements.

Two years after graduating from university, Dr. Craig Biehl’s life was turned right-side up from a…

A Different Kind of Bible Study

Bible Adventures (English and other languages)