How can parents help their teens make a positive impact on the culture? In this interview, we will learn from Cheri Fields how podcasting can be used to do just that. She will also be sharing about her books, Mysteries of Time and Creation: A Short Intro to Young Earth Creation and The End: A Bible Prophecy Study for Teens. Cheri is a talented lesson designer, speaker, and author whose contagious passion is evident in her work.

TOS: What interested you in creating a podcast, and how long have you been podcasting?

Cheri: In 2010, my husband gave me an iPod, and I’ve listened to podcasts as my main source of education and entertainment ever since. Audio is the one medium that takes advantage of surplus time, since we all have driving and chore time. Listening is great for the imagination and works well for building connections with an audience. As a content producer, you can do a podcast talking about anything in any style you want, and it’s not as hard to make as a quality video. After listening for several years, I got the idea of expanding my blog to include a podcast in 2014.

TOS: What advice do you have for teens who are interested in starting their own podcast?

Cheri: None of the pieces are that hard, but it does take discipline. I noticed that a lot of the first generation of serious podcasters are also musicians. It takes the same kind of day-in-day-out steady work to keep a show going after the novelty wears off, but there’s no law that you have to do a podcast for years. You could make an eight-episode show and be done if you want.

I also remind everyone that nobody likes their own voice in a recording at first. We are used to hearing ourselves through our skull, which gives the sound a depth no one else can hear. It’s embarrassing to hear how high pitched we actually are! But you have probably noticed that strangers don’t usually start giggling when you start talking; it’s only you who thinks you sound weird.

TOS: How can parents help their teen start a podcast?

Cheri: Ideally, start your own, and let them follow in your footsteps! Unless they own an iPhone, it’s probably going to take a bit of money to get a mike and headphones. Getting the first episode ready to go live requires doing a whole list of new things. It’s similar to the kind of adulting it takes to open a bank account or learn to file your own taxes. Depending on the young person, it can be overwhelming, but, like most adulting, each piece of the project isn’t rocket science; it’s just new.

In my course, I point out that lots of podcasters talk about the things that otherwise drive their families crazy because they won’t shut up about it. If a teen has an idea or story to share, encourage them to find people with the same passion by learning to record and publish their own show.

TOS: Could you tell us about your books, Mysteries of Time and Creation: A Short Intro to Young Earth Creation and The End: A Bible Prophecy Study for Teens?

Cheri: I take both ends of the Bible the same way: as literally meant, except where clearly allegorical. I also don’t start with human frameworks, whether scientific or theological. Both Genesis and Revelation are totally fascinating!

I tried to get a full version of my young earth creation book for kids, ages 10-12 years old, traditionally published, but my audience was too small. Instead, I wrote up an abridged version of the basic concepts without a bunch of footnotes, made some cover art, and created it as a self published eBook. I only charge a dollar for it and have had lots of people say it’s a fun introduction to the basics of creation evidence without being intimidating.

Then, after the last presidential election, I realized it would be good for my mental health to write up the Bible study I teach on prophecy with my own teens. I’ve designed it to teach us how to do a topical study without having to have someone else do the thinking for us. It’s long and more logically complicated than most kids can handle yet, which is why I added the “for Teens.” I’m mostly an unschooler, so the format flows where the thoughts and verses go, rather than fitting in neat, lesson-sized units.

TOS: Thank you, Cheri! You can find out more about Cheri’s course, Podcasting to Change the World, on SchoolhouseTeachers.com.

If you’d like more information about designing lessons for our site, please email the Executive Manager at stmanager@theoldschoolhouse.com. 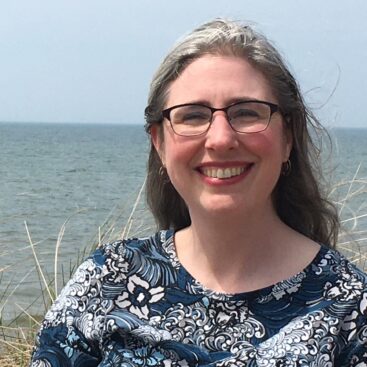 Cheri Fields is a second generation homeschooler, science writer, and podcaster. She freely admits her family…