Getting Started with Our Scientists A-Z Homeschool Course

Scientists A-Z homeschool course is a fun look at science through the lens of history. Each short lesson is followed by comprehension questions, activities, and additional resources that provide options for going deeper.

Corresponding lessons on SchoolhouseTeachers.com and a journal for notetaking and research

Twenty-six weeks in this Scientists A-Z homeschool course takes a fun look at science through the lens of history.

B Is for Alexander Graham Bell

Alexander Graham Bell is known as the inventor of the telephone. He was born in Scotland on March 3, 1847. Bell’s mother was almost completely deaf, and his father taught deaf students how to speak clearly and in a way that could be understood. In 1870, his family moved to Canada. In 1871, he moved to Boston, Massachusetts, and started working on a device for transmitting speech.

Bell’s work was funded primarily by Gardiner Hubbard, one of the founders of the Clarke School for the Deaf, where Bell taught for a period of time. Bell worked to help Hubbard’s daughter who was also deaf, and they eventually married. Bell’s initial work was on the telegraph, and this led to his work on the telephone.

Bell started by working on harmonic transmission, which centered on sending signals at different frequencies through a telegraph wire. The idea was to send multiple telegraph signals at once, each one on a different frequency. From that point on, it was a simple leap to try to send the human voice over wires.

Bell was aided in his work by his lab assistant, Thomas A. Watson. Together, they worked on transmitting speech through a device.

Finally, on March 10, 1876, they produced speech. The first signal was from Bell to Watson. The message is remembered as something similar to, “Mr. Watson, come here—I want to see you.”

Bell continued to refine his invention until it was ready to show at the Philadelphia Centennial Exhibition. In August of 1876, Bell took part in the first one-way long distance phone call, from Brantford, Ontario, Canada, to Paris, Ontario, Canada.

Gardiner Hubbard put together a group that started the Bell Telephone Company in 1877. Bell became rich from the company but sold most of his stock and moved on to study ways to help the deaf improve their lives.

Bell also went on to work on other inventions, such as an improved surgical probe that was used with success in World War I, and he experimented with flight.

We hear often about Alexander Graham Bell and Albert Einstein, but scientists such as Carl David Anderson, John Dalton, Friedrich Wilhelm Ostwald, and many others are often forgotten. The Scientists A-Z homeschool course takes a look at twenty-six scientists throughout history, from the early studies of Nicolaus Copernicus to the more modern work of Frederick Sanger. Each study includes facts, questions, activities, and additional resources. 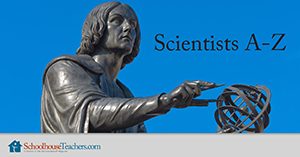 Would you like to tell others about this Scientists A-Z Homeschool Course?