Our Exploring God’s World with Kindergarten Science combines young children’s love of animals and nature with easy-to-follow short stories and tons of hands-on activities. From flowers to flies and cats to coal, enjoy ninety bite-sized lessons, conduct experiments, and have fun!

Corresponding lessons on SchoolhouseTeachers.com and a journal for notetaking and research

Our Exploring God’s World with Kindergarten Science homeschool course is a fun introduction to science for your kindergarten student.

The Cat — Part One

Kitty came walking along the garden path. Harry watched her and saw that she did not like the damp ground. She jumped over the pools and then began to run, shaking her paws as she got to the house. “Now, a dog does not mind wet feet,” Harry thought. “He will go into the water, but Kitty will never go into the water. She does not even use water to wash herself. Come here, Kitty! You don’t like to wet your nice fur, do you?”

As Harry was always kind to Kitty, she let him pick her up and carry her into the house. He sat down on the rug with her and stroked her glossy back. One of her forepaws rested on his hand, and he began to look at it. “Here are five toes,” he said, “but what funny toes they are!” He gently turned the paw over and saw the sharp nails drawn in under the fur.

The cat knew that he would not hurt her, so she kept her claws in and let him feel them on the outside. He found under the paw a soft smooth pad. “Now I know how it is that she can walk so softly!” he said. “This must help her to walk in that way.”

Here Kitty gave a great yawn and stretched out both her paws, claws and all. Harry saw the sharp nails like hooks and watched them go back into their sheaths. Then she curled herself up on his lap. He took hold of one of her hind feet and found only four toes upon it. “I wonder if this is a mistake,” he said, “or if the other one is the same.” Yes, it was just the same. There were four toes, with a claw at the end of each.

Welcome to our Exploring God’s World with Kindergarten Science homeschool course! The main text of this kindergarten science class is a collection of short stories about different science topics. The short stories are about a brother and sister, Harry and Dora, and their parents as they learn about the world around them. Each chapter also includes science vocabulary words and ends with additional information about the topic. Science related activities and worksheets expand your child’s learning for each of the topics. Most children at this age are fascinated by animals, plants, and nature. They also thrive on short, focused lessons and plenty of hands-on activities.  Additional activities, links to websites, and videos where possible are included but optional. 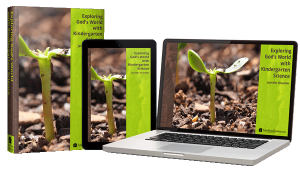 Would you like to tell others about this Exploring God’s World with Kindergarten Science Homeschool Course?