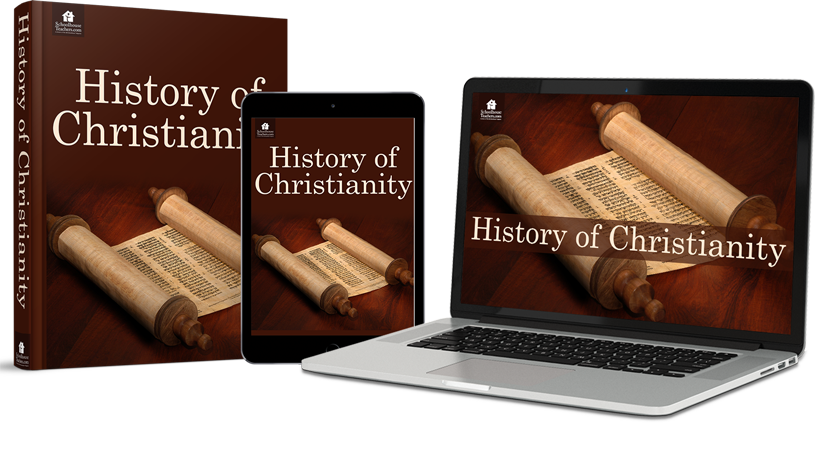 Welcome to Our History of Christianity Homeschool Course

How has Christianity influenced Western civilization? What events have greatly impacted Christian history and the world? In History of Christianity, high school students will have the opportunity to explore the roots of Christianity through seventeen video-based lessons along with worksheets. This course covers the making of the KJV Bible, Christianity in America, and so much more.

Getting Started with History of Christianity

History of Christianity is a video-based homeschool course for students that want to explore the Jewish roots of the Christian faith; Christianity’s influence in shaping Western civilization; the people, places, and events that have greatly impacted Christian history and the world, and more.

Go to Class Lessons and download the worksheet and essay questions. Start watching the first video and answer the questions. Continue with each subsequent video.

This video-based history of Christianity homeschool course includes almost twenty-eight hours of engaging documentaries, as well as printable worksheets for the students. More than 2,000 years of history could never be condensed into one course, so this course, by nature, only presents a portion of the history of Christianity. Here are some of the topics explored:

Jewish Roots—The Heritage of the Christian Faith: Judaism and Christianity. Two spiritual points of view that seem worlds apart—but it hasn’t always been that way! In this special, you’ll learn about the rich heritage of the Christian faith, which is grounded in the same Old Testament Scriptures as Judaism. You’ll be guided through the Jewish roots of Christianity by three men who are Jewish by birth but followers of Jesus by choice.

The Jewish Foundation of Christianity: Did the first followers of Jesus intend on starting a new religion? Did they realize that their faith in Jesus as the promised Messiah would impact the world forever? Filmed on location in Israel, this special discusses Judaism and the foundation it provides for Christianity. Gain fascinating insights into the Jewish sacrificial system, spiritual principles and symbolism of the Jewish temple, and the promise of the Messiah.

History of Christianity: This survey is designed to further stimulate your curiosity by providing glimpses of some of the pivotal events in the spread of Christianity and sketches of great Christian figures who have significantly affected Christian history, thereby shaping the history of the world. It includes a detailed leader’s guide and student workbook.

The Dawning: Christianity in the Roman Empire: For more than 300 years, Christians living during the rule of the Roman Empire endured persecution as a result of their faith. How, in the midst of such brutal opposition, did this growing group of believers emerge and ultimately bring Caesar to his knees? In this video, students will take a closer look at the struggles faced by early Christians and their driving force to endure, as Dr. Joseph Stowell, President of Cornerstone University, takes them on an amazing journey to modern-day Rome. They’ll also visit Pompeii, Herculaneum, Ephesus, and other significant locations that reveal the formation of the Christian faith in the Roman Empire from a social, economic, and political perspective.

The Making of the KJV Bible: This brings to life the fascinating history of this great work, along with its impact for us today by bringing the viewer right into the heart of the translation process through specific passage examples. While exploring the varying viewpoints of the forty-seven translators, students get a firsthand look at the immense attention to detail they used and gain a renewed appreciation for the sacred Scriptures and their place in our homes and churches.

Africa and the Bible—The Earliest Roots of the Faith: Uncover and explore the early and deep roots of Christianity on the African continent, gain insights into the spiritual heritage and identity of people of African descent, and trace the story of God’s hand on the people of this land throughout Biblical and church history with this 79-minute video.

We the People: The Character of a Nation: Travel back in time through the eyes of America’s unsung patriots to experience the trials and victories that have formed our nation’s destiny and secured the blessings of liberty for future generations. Look at the role of Christianity in America’s founding through the stories of a diverse cross-section of people who have all played a role in the history of the United States.

The Incomparable Jesus: Part One: Dr. Stott shows from the pages of Scripture the uniqueness of Jesus and how He is the center of history. He demonstrates that there has never been another like Him on the face of the earth. Dr. Stott unfolds how the New Testament, in all of its parts with diverse but complementary perspectives, joins in a chorus of witness and praise to Jesus Christ as Savior of the world and the Lord of history.

The Incomparable Jesus: Part Two: Over the centuries the church has grown in its appreciation of the fullness of the person and work of Jesus. In this lecture, Dr. Stott shows the glory of Christ and what He means for us and our world.

The Incomparable Jesus: Part Three: In this lecture Dr. Stott provides a rapid bird’s eye view of the remarkable effects that Jesus has had on some of the greatest change agents in all history. He shows how Jesus has been the motivator, inspiration, source of strength, model, and goal for diverse heroic efforts.

The Incomparable Jesus: Part Four: In this lecture, Dr. Stott expounds on the comprehensive and compelling vision of Jesus Christ the living Lord as set forth through the eight visions of the Apocalypse, or Book of Revelation.

People of Faith: Christianity in America: Is America now or has it ever been a Christian nation? What is the meaning of separation of church and state? How can the church be a faithful Gospel witness in a pluralistic society? What will the church look like in the future? People of Faith: Christianity in America brings perspective to these questions and more.

How Should We Then Live? This is Dr. Francis Schaeffer’s spectacular series on the rise and decline of Western culture from a Christian perspective. This program presents profound truths in simple language and concludes that man’s only hope is a return to God’s Biblical absolute — the Truth revealed in Christ through the Scriptures. Each episode focuses on a significant era of history while presenting answers to modern problems.

Trial and Testimony of the Early Church: The first three centuries were decisive for Christianity. The very existence of the church itself was threatened by powerful opponents who wanted to destroy it. These programs go to the locations and use dramatic re-creations to bring you close to the early believers.

These twelve lessons explore the history of Christianity for homeschoolers.

As presented, this history of Christianity course includes approximately 28 hours of video instruction. If additional projects are completed, such as the provided worksheets, as well as additional independent reading, research papers, presentations, etc., on themes related to this study that brings the course to a total of 60-90 hours, the course may be worth .5 academic credit.