Welcome to Our Modern History for Elementary Homeschool Course

Getting Started with our Modern History for Elementary Homeschool Course

Our Modern History for Elementary homeschool course combines both American and world history and touches on select topics and events from 1754 through present. History lessons include readings, puzzles, and activities that explore the founding of the United States through World War II, as well as global events such as British colonization, Russian history, and the history of Israel.

Corresponding lessons on SchoolhouseTeachers.com; access to the internet, computer, and a printer; 3-ring binder for notetaking and research

Go to Class Lessons and download the lesson plan and lessons. Follow the instructions each day on the lesson plans and mark them off when completed. Be sure to write any needed homework in your notebook.

Course Outline for our Modern History for Elementary Homeschool Course

Objective: to learn the causes, events and effects of the French and Indian War

Prior to the French and Indian War, English colonies extended in a thin fifteen-hundred-milelong line along the eastern coast of North America. The colonies often did not extend much more than 100 miles inland from the coast. As settlers pushed out beyond the coastal region, conflicts with other nations and tribes occurred.

Both France and England were expanding their empires into the Ohio River Valley. In 1753, a chain of forts was built by the French on the eastern end of the Ohio region to keep the British out.

Also, in 1753, Virginia Governor Robert Dinwiddie dispatched an expedition against Fort Duquesne in Western Pennsylvania. Led by twenty-one-year-old George Washington, the expedition demanded that the French abandon their new forts and return to Canada. The French refused.

During this time, the leaders from the colonies met with the support of the English government to negotiate a treaty with the Iroquois. They determined that they needed to unify to confront the threat of the French and the Indians. Out of this meeting, they developed the Albany Plan.

Fill in the blank from today’s lesson.

To a view a full sample of the class, click here.

The first 28 weeks of this Modern History for Elementary homeschool course traces United States history from the French and Indian War through the end of World War II and the civil rights movement. The homeschool history course lessons continue with a seven-week study of British colonization, Russian history, the history of Israel, the lives of several missionaries, and major archaeological discoveries of modern times, concluding with a final history project. 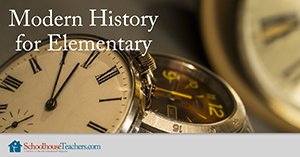 Would you like to tell others about this Modern History for Elementary homeschool course?