Welcome to Our US and Modern World History homeschool Course

Getting Started with Our US and Modern World History Homeschool Course

From the days following the end of World War II through the War on Terror and beyond, this US and Modern World History homeschool history course examines events that have shaped the nation and the world through the lens of a Christian worldview by looking at not only what happened, but why it happened and what the consequences and impact have been.

Corresponding lessons on SchoolhouseTeachers.com; 3-ring binder for compiling the notebook assignments; access to the Internet, computer, and printer; ability to use World Book resources

Lesson One – After the War

The date is May 8, 1945. Crowds are filling city streets all over the world. Germany has surrendered after a bloody and brutal grab for power across Europe. A few months later, on September 2, a formal surrender by Japan takes place aboard the USS Missouri, anchored in Tokyo Bay.

Just weeks before the Allied forces had issued the Potsdam Declaration, a statement calling for the surrender of all Japanese armed forces during World War. When it became clear that Japan was not going to surrender, the United States Army Air Force dropped an atomic bomb on the Japanese city of Hiroshima. Three days later on August 9, 1945, a second bomb was dropped on Nagasaki.

World leaders gathered together to try to rebuild what was left of countries, shattered lives, and displaced people. The loss was staggering. Those who had been responsible for unbelievable atrocities were brought to justice.

The world was poised to come together for a lasting peace. Unfortunately, that peace was fleeting. The next days and years would usher a Cold War, lasting decades. The Cold War era lasted from 1946-1991.

The Cold War wasn’t the only struggle that was to take place in the next few decades. The tiny nation of Israel was about to take its place on the world stage. The Civil Rights movement was going to shape the following decades, and rumblings of communism were beginning in Asia.

But first, the Cold War.

Why exactly was it called a Cold War? Because, despite the apparent hostilities between the United States and the USSR (Union of Soviet Socialist Republics), no actual military activity took place in the respective countries. This isn’t to say that other locations in the world weren’t affected by the animosity between the two superpowers. Their “war” was one of words, threats, and other actions. So how did it all happen?

What do you remember about the divisions of power during World War II?

On one side stood the Axis contingent. The mighty German machine led by Hitler and his Nazi party. Joining Hitler were Italy and Japan. On the other side were the United States, the Soviet Union, and Great Britain. They were known as the Allies. Other countries fought for the Allied cause: France, Australia, Canada, New Zealand, India, and China.

One of the heroes of the Christian faith has to be Cornelia “Corrie” ten Boom. She was born in the Netherlands in 1894 in a devout Christian family. During World War II, she and her family hid hundreds of Jews in their home. As you remember, the Nazis were rounding up Jews by the millions and sending them to concentration camps. The Nazis were also unsympathetic to anyone who tried to help the Jews. Corrie and her family were arrested and taken to a concentration camp. She was the only one of her family to survive.

Later Corrie wrote an exceptionally touching book called The Hiding Place about her experiences. She also began to speak all around Europe and eventually the world about her life in a concentration camp. In 1947, she was speaking in a church in Germany. She spoke of God’s forgiveness. She used the ocean to explain God’s forgiveness. “When we confess our sins, God casts them into the deepest ocean, gone forever,” she said. After the service, a man approached Corrie, hat in hand. She was horrified to realize that this man had been a guard in the very concentration camp in which she had been imprisoned. He acknowledged his role during the war, but he told Corrie that he had accepted Christ as his Savior and knew that God had forgiven him of all his sins. He then asked Corrie to forgive him, as well.

Corrie froze. But then she remembered that God told us that unless we forgive others He cannot forgive us. She stepped out in faith and clasped his hand. Corrie described it like this: “The current started in my shoulder, raced down my arm, sprang into our joined hands. And then this healing warmth seemed to flood my whole being, bringing tears to my eyes. ‘I forgive you, brother!’ I cried. ‘With all my heart.’”

What would you have done in Corrie’s situation? Would it have been easy to forgive a man who had been a part of such horrors?

More About This US and Modern World History Homeschool Course

This homeschool history course is intended to be an engaging, immersive course. Each lesson contains videos, articles, and other resources that need to be explored. The best way to traverse the course is on the computer or tablet. There are interactive pages and notebooking resources that can be printed out. A history notebook will be assembled as the student works through the course. All history lessons are made up of a student reading assignment and a page containing assignments to explore and discuss. Each reading assignment has the major topics linked to World Book, available with your SchoolhouseTeachers.com membership. Encourage your students to take advantage of the wide variety of resources found there!

Each unit comes with a Unit Test and a Unit Extra page that contains some extra helpful suggestions. You can use the test as seriously or as informally as you wish. It is a simple way to gauge retention of knowledge. The goal isn’t as much about remembering specific dates as it is about students remembering the real life people and consequences of history. Answer keys for parents are also included.

Transcript Information for Our US and Modern World History Homeschool Course

If this homeschool history course is taken in full, spending approximately 180 hours completing all assignments, it can count for one high school credit. 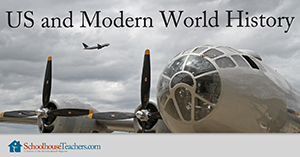 Would you like to tell others about this US and Modern World History homeschool class? 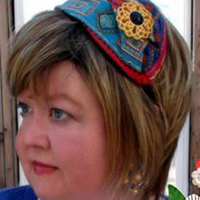 Rebekah is a homeschool momma with a background in hair-dos, education, and writer’s block. She attended…