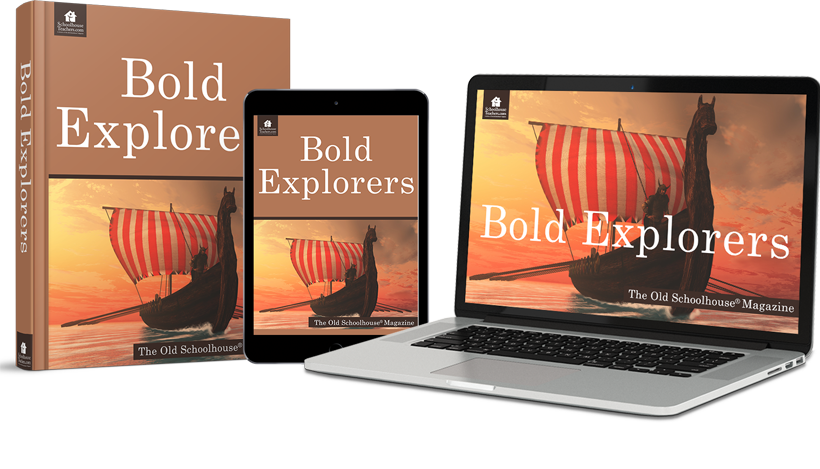 Who is Gustav Nachtigal? What did Antonio Alaminos discover? To where did Jacob Roggeveen travel? Your student will learn the answers to these questions and more in our historical course, Bold Explorers. Through thirty-five lessons, upper elementary and middle school students study both well-known explorers and lesser-known individuals through readings, discussion questions, and related activities.

Getting Started with Our Bold Explorers Homeschool History Course

Bold Explorers looks at the lives of more than thirty explorers and is divided into thirty-five short readings. Most homeschool history lessons include a writing or research prompt for further study; a few include hyperlinks for more historical information or a hands-on activity. Several well-known explorers are discussed, as well as dozens of lesser-known explorers.

Lessons on SchoolhouseTeachers.com; journal for notetaking

The world is a big place. That doesn’t come as a surprise to you and me. All of our lives we’ve had maps that show us where we are compared with every single nation on earth. We can count the time zones and know what time it is in a country on the opposite side of the world. We can even look at online maps and webcams and see what is happening a hundred or a thousand miles away.

But have you ever stopped to think about the men and women who have made all that knowledge possible? Explorers, cartographers, and record keepers who left everything familiar and set off to discover something new? Maybe it was a continent. Maybe it was a hidden treasure. Maybe it was a lost city or a mythical land. Sometimes it was simply to know what lay beyond what was known at the time.

They didn’t have satellites, cell phones, or GPS. Many explorers spent their lives looking for new lands and challenging themselves in ways that most of us can only dream of. Some of them never returned. But because of the ones who did and the ones who recorded their stories, trade routes were formed, lands were settled, nations were founded, and the Gospel was preached.

We’re going to look at the stories of some of these explorers and record keepers. We’ll talk about a few of the famous ones you’ve heard of like Lewis and Clark and Neil Armstrong, but we’ll spend most of our time discussing some you may not know about such as Antonio Alaminos, Fabian von Bellingshausen, Jacob Roggeveen, and Francisco Xeres.

Like all of us, these men did both honorable and dishonorable things. Some of them ended up hurting the people they met or even tried to help. But whatever the reason for their exploration, we can all learn from their examples of courage and enthusiasm.

Before we get started, keep in mind one important thing. There is still more exploring to be done. There are still hidden places, forgotten lands, and lost peoples. There are languages to be translated, cultures to be discovered, and stories to be recorded. Is there something God is calling you to discover?

Antonio Alaminos was one of the most skilled navigators of his day. In 1513, his job was to pilot a boat for Ponce de Leon. As they attempted to travel south along the eastern coast of Florida, he encountered an ocean current so powerful that it pushed the boat backward in the opposite direction, despite the fact that the wind was in their favor.

But Antonio did more than simply observe this phenomenon. He remembered it and, six years later, put it to good use. This time he was on a journey northward from Mexico. He needed to sail northward along the coast of North America until it was time to turn and sail toward Europe. He remembered the strong current and purposely sailed into it. Allowing the powerful current to move him along, he made excellent time in his voyage. His discovery of the existence of the Gulf Stream, and his demonstration of how it could be used to a sailor’s advantage, impacted travel and trade for centuries to come.

Chart the Gulf Stream on a map. What countries does it pass by? What are some of the ways it affects our lives today?

Was there a continent at the southernmost end of the globe, and was it inhabitable? These were two of the questions Fabian von Bellingshausen set out to answer in 1819. Following in the footsteps of James Cook, whom he admired, Bellingshausen carried his exploration of the Antarctic region even further.

Over two years later, he would conclude his journey. In that time, he traveled back and forth from the Antarctic region to Australia and parts of the South Pacific. But the part of his journey that will always be remembered is his circumnavigation of the continent of Antarctica. He, and his extremely courageous and talented crew, traveled around the entire mainland. Sadly, however, he never realized that what he saw was actually the seventh continent. He saw icebergs but was not able to land and explore enough to determine that the ice he saw was indeed the mainland. By the time the records of his travels were published, there was some debate as to whether he had actually been the first man to see the Antarctic mainland.

Would you travel to Antarctica? Why or why not? If you would, what would you most like to see there?

Bold Explorers is a homeschool history course that introduces elementary and middle school students to thirty-five explorers from around the world.

This Bold Explorers homeschool history course looks at the lives of more than thirty explorers and is divided into thirty-five short readings. Each section includes the name of the explorer, the name of the nation that sent him, and a summary of his historical accomplishments. Most course sections end with a writing or research prompt for further study; a few include hyperlinks for more information or a hands-on activity. An additional hands-on history activity, a fill-in-the-blank worksheet, and a multiple choice quiz (with answer key) are located at the end of this fun homeschool history course.

Use this unit by working through it in a few days or dividing it over the course of several weeks (such as doing one section a day for seven weeks).