Kingdoms of the World: Fifteenth to
Eighteenth Century: World History

Welcome to Our Kingdoms of the World History Homeschool Course

Getting Started with Our Kingdoms of the World History Homeschool Course

Our Kingdoms of the World History homeschool course explores life in the Americas and around the world from the Age of Exploration (beginning in 1492) through the early 1700s.

Corresponding lessons on SchoolhouseTeachers.com; journal for notetaking and research

Course Outline for Our Kingdoms of the World History Homeschool Course

Dig into the fascinating history of the Age of Exploration through the early 1700s with this homeschool history course.

Course Sample for Our Kingdoms of the World History Homeschool Course

Kingdoms of the World: Fifteenth to Eighteenth Century
World History
By Melissa Bontadelli

Week One: Americas – The Incan Empire

Objective: to learn the history of the Incas

The Incas were a unique empire of people that lived in South America. Their empire spanned from the early 1400s until the mid-1500s. During this time, they conquered many people and made a vast empire. As a people, the Incas had a variety of strong beliefs on life, death and creation. There are two different versions of the Incas creation story that exist.

The first Incan creation story says that a creator god Viracocha came out of the ocean and created the sun and all ethnic groups. The first people were buried by Viracocha and later came out of rocks and springs and back into the world. The Incas themselves were brought into existence by the sun god Inti. This made them the chosen people.

The second Incan creation story revolves around humans. The first humans were Manco Capac and his wife Mama Oqllu. They lived inside caves south of Cuzco. Soon, three more brothers and wives were born, and they all set off to establish their civilization. The defeated their enemies with the use of stone warriors they called pururaucas. They finally settled in the valley of Cuzco when Manco Capac threw his golden rod into the ground and founded the capital city of Cuzco.

The city of Cuzco became an important center in the late 1400s when the Incans had their first great ruler Pachacuti Inca Yupanqui. This is when the Incans started massive expansion of their empire through the conquest of neighboring villages and tribes.

More About Our Kingdoms of the World History Homeschool Course

The course begins with the Americas. Students learn about life in the Inca Empire, meet explorers including Cabot and da Gama, see how early Spanish and English settlements developed in the New World, understand the significance of early leaders and settlers including Roger Williams and William Penn, learn about life in the thirteen American colonies, and understand the significance and effects of the Great Awakening.

The course continues by leading students through a study of Constantinople, the Kingdom of the Songhai in Africa, the Mughal dynasty of India, the works of men such as Copernicus and Galileo, the Reformation and leaders such as Luther and Zwingli, the history of Russia, the Spanish Armada, the slave trade, Elizabethan England, Tokugawa Japan, the Qin dynasty of China, and more. 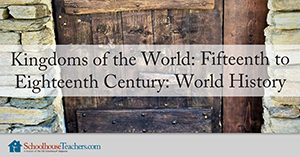 Would you like to tell others about our Kingdoms of the World History Homeschool Course?