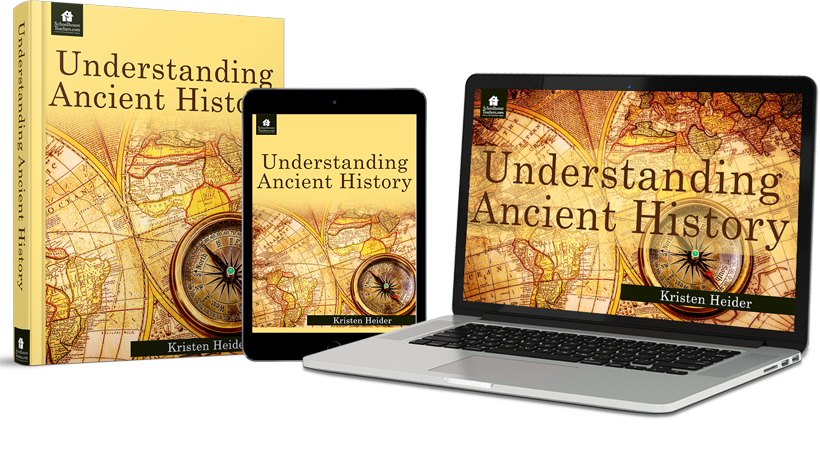 Getting Started with our Understanding Ancient History Homeschool Course

Understanding Ancient History leads homeschool high school students on a journey through ancient history, from the early civilizations of Sumer and Egypt through the time of Christ. Each unit begins with how geography influenced the development of the culture and then moves into exploring various facets of history and daily life. The civilizations of Egypt, Mesopotamia, China, India, Greece, Rome, and Africa are included, as well as a brief introduction to the Olmec and Chavin peoples.

The study of history is very important, but one should remember, as Leopold von Ranke wrote, that it is important to not only know what happened, but also how it happened in history. While memorizing dates, names, and locations can be beneficial, reading the words of individuals who lived throughout history is a key to understanding why the people did what they did. In short, the past influences the present which, in turn, shapes the future.

At the end of each unit, I’ve listed additional resources that can help further your study of ancient history. These are not necessary to complete this course.

In this course, we’re going to focus on two key areas: enduring understandings and essential questions.

Please keep in mind that the dating of ancient history is a complex matter. On SchoolhouseTeachers.com, we support and teach that the Bible is true, that the events such as the creation of Adam and Eve and the Flood as recorded in Genesis are historic facts, and that the earth is only several thousand years old. The World Book articles referred to in this course may, at times, offer dates that are not consistent with this view. For a more thorough study of Biblical chronologies, and their historic accuracy, please see this series of articles on Creation Ministries International: http://creation.com/history-questions-and-answers.

World Book provides a number of useful resources for this unit study on Ancient History. You will be using the World Book Online resources that are part of your SchoolhouseTeachers.com membership extensively for this course. For your log in information, go to https://schoolhouseteachers.com/world-book/#1490804064729-8477c70d-092d and click “To Access World Book Resources.”

During the study of the introductory unit on Ancient History, you should be able to meet the following objectives:

Throughout this course, you will need to create a visual dictionary that includes images and definitions. The images will be your choice—specific images will not be mentioned. As you study, collect images that strike you as interesting and add them to your visual dictionary.

There are several ways you can format your dictionary entries. You can include the image and a simple definition; you can use a vocabulary map like any of the ones shown here http://www.enchantedlearning.com/graphicorganizers/vocab/ or https://www.teacherspayteachers.com/Product/FREE-VOCABULARY-GRAPHICORGANIZER-545291

As people spread out and migrated to various parts of the world following the Flood, they built settlements and developed civilizations. The four earliest civilizations we are going to study developed in the Nile River Valley in Africa, in the valley of the Tigris and Euphrates rivers in southwestern Asia, in the Indus River Valley in southern Asia, and in the Huang or Yellow River valley in eastern Asia.

A civilization can be defined as a complex culture that has at least three characteristics: people have a stable food supply and are able to produce surplus or extra foods, people establish large towns or cities with some form of government, and people perform different jobs, instead of each person doing all kinds of work (which is called division of labor).

When you look at the four civilizations above, you’ll notice that they all center on one or more rivers. The rivers in these valleys flood during periods of heavy rains, but rain little the rest of the year. This, combined with irrigation techniques used by the farmers, provided enough food, not only for their own people, but for others as well.

These permanent settlements also had other things in common, such as a leadership and government with rules that governed the people and directed their work. As farming and irrigation techniques improved, fewer people were needed to work in the fields. People were able to divide the jobs that needed done by skill, or more often, by a social class structure. Laborers provided the work needed to build great palaces, temples, and other public buildings. Merchants and traders worked in commerce and finance. Artisans were specially skilled to create various masterpieces.

As the merchants and traders continued in their fields, cultures shared and spread ideas, art, and even beliefs from one area to another.

These civilizations also developed calendars, writing systems, technology, art, a military, and a belief system. Calendars were key because the people needed to know when the yearly floods that their crops were dependent on would begin. Writing systems were key to communication, commerce, religion, literature, and administration. People throughout history have continued to develop new technologies to meet their needs or make their lives simpler or safer. Whether the technology was wheeled vehicles for transportation, better systems of irrigation, or modern inventions like satellites and cell phones, the desire to create that was placed in our hearts by God when He created us has always made itself known.

Unfortunately, the sinfulness of mankind has also always made itself known. Conflicts between people perpetually arose, driving the need for an organized military for defense.

At the heart of man is a desire to worship God. That desire has manifested itself in many ways. In some civilizations, man has made himself a god and worshipped himself by denying the existence of anything beyond. Other cultures created gods out of nature that controlled many aspects of human life. The Hebrews, whom we’ll learn about later in this course, worshipped Jehovah God, the Creator of all, who revealed Himself to men throughout history.

If this homeschool ancient history course is taken in full, spending approximately 180 hours completing all assignments (two hours per day for eighteen weeks or one hour per day for thirty-six weeks), it will count for one high school credit.

A full year of our Understanding Ancient History homeschool course introduces your high school student to major civilizations and events from Sumer and Egypt through the time of Christ.

Unit Three: Mesopotamia and the Origins of Judaism

The study of history is very important, but one should remember, as Leopold von Ranke wrote, that it is important to not only know what happened, but also how it happened in history. This ancient history homeschool course focuses on two key areas: enduring understandings and essential questions.

Most units in this homeschool history course include a section on the vocabulary connected with the time period, as well as the civilization’s key leaders. Assignments, quizzes, and tests are included throughout. Answer keys are provided.

Numerous optional activities are also included throughout the course for students who wish to dig deeper.

Kristen Heider is a housewife and mother to a stepson and two elementary-aged children. Kristen holds…