Welcome to Our Homeschool American History: From Columbus to 1914 with Socratic Discussion Curriculum

This 32-week homeschool history course begins with a nine-week study of how to study history using the classical method. Students learn the tools of a historian including how to distinguish fact from opinion, use supporting evidence, analyze primary sources, and more. Students spend the remaining 23 weeks learning about the history of the United States up to 1914 and debating and discussing it objectively.

Corresponding lessons on SchoolhouseTeachers.com; access to a computer and printer; access to a library for checking out resources; journal for writing assignments, notetaking, and research

Go to Class Lessons and download the lesson plan. Start with the Day 1 assignment. Follow the instructions each day on the lesson plan and check them off when completed.

This thirty-two-week homeschool history course teaches middle and high school students how to study history using the classical method as well has how to critically analyze and discuss United States history up to 1914.

The study of history is a perfect subject to practice the skills of the Dialectic and Rhetoric Stage. History is such an excellent subject to practice analysis and logic because it is something that is more concrete than philosophy. It is a concrete subject, meaning there are real people and events to practice the skills of logic and rhetoric. Presented in a discussion format, history is interesting, because it involves the analysis of the student. As many historical events can be viewed from a variety of perspectives, history is a topic that is conducive to discussion. Did the North have to go to war against the South in the American Civil War? What was the main cause of the fall of the Roman Empire? Was Napoleon a hero or a villain? Was America’s westward expansion in the 1800s a triumph or a tragedy? Discussing and debating these topics hone the student’s skills of Logic and Rhetoric.

Students taught the skills of the Dialectic and Rhetoric in history are also able to analyze modern media. How many times have we seen a “shocking headline” on an Internet news service home page, only to learn a day later that it was untrue? How many times have you read about the same event presented in two very contrasting perspectives from two different wire services? One goal in history education is to teach students the value of analyzing news sources and recognizing bias. When students can determine the political perspectives of the major news gathering services in the United States, they will be better able to question the claims of journalists and politicians. We want our children to be citizens who are not only well-informed but who are able to decipher the truth from the media.

To gain the full impact of this homeschool history course, it is important that a parent or older sibling work through the class with the students.

Classical education in the humanities refers to an educational approach that is used to teach the subjects of the humanities. The humanities are academic subjects that study the human condition, using methods that are primarily analytical, critical, or speculative. Dorothy Sayers was an English writer who spearheaded the beginning of the classical approach to education in modern times. Writing in twentieth-century Great Britain, she wrote in “The Lost Tools of Learning” that students need first to learn the analytical tools of learning before they learn a variety of “subjects.” She separated a student’s life into three stages:

The Grammar stage is appropriate to the child before the age of 11 or 12. Sayers called this stage the “Poll Parrot” because the child is so intent on pleasing his parent that he will parrot whatever the parent teaches him. I’ve met many parents of children at age ten who are so worried their children are not independent thinkers, and they worry that there is something wrong with their teaching. Don’t worry! Rejoice! It is a beautiful thing to work with a child before he becomes argumentative. In the Grammar Stage, it is enough if the child spends time reading interesting stories of history, memorizing simple historical facts, and has an idea where continents and countries are located.

Near the age of 12 or so, when a child begins to express his own thoughts and seems to want to argue intellectually, he has then entered this second stage, what Sayers called the Dialectic. In this stage, the student is ready and capable of learning the tools of learning. In the study of history, these tools include but are not limited to the following: distinguishing fact from opinion, developing good judgment from historical evidence, critiquing various historical sources, understanding the various influences on history, using Socratic discussion methods, and writing analytical essays.

Beginning at the age of 12, a student is analytically capable of understanding nearly every argument that exists. The student is incredibly open-minded and will not label his teacher a liberal or conservative after the first day. This student is also like a sponge, able to soak up incredible amounts of knowledge. And finally, at this age, the student still likes or even loves the teacher, even if he or she won’t say it. For those who homeschool, this is a fascinating age.

In the final stage, Rhetoric, the student continues to use the tools of learning and works on perfecting his ability to speak and write. The student in the Rhetoric stage should be given more primary sources to read and analyze and spend less time working with a textbook. The student should be introduced to the great thinkers and writings of all time.

This homeschool history course counts as a social studies credit. Students who complete the 32 weekly lessons, including all reading and writing assignments, and spend approximately 180 hours completing the course, may earn 1.0 academic credit. 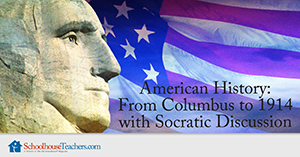 Would you like to tell others about this American History: From Columbus to 1914 with Socratic Discussion homeschool course? 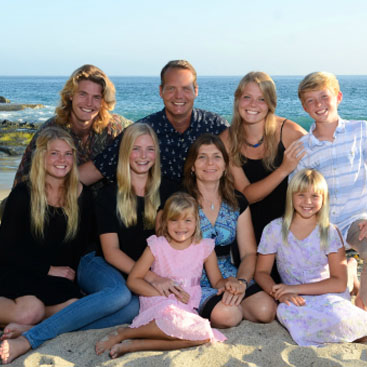 John and Zdenka De Gree live with five of their children in San Clemente, California. (Their…