Welcome to Our ABC with ME Homeschool Language Arts Course

Getting Started with Our ABC With ME Homeschool Language Arts Course

This ABC With ME homeschool language arts curriculum explores notable figures in history through a printable series of poems, informative lessons, additional resources, and recommended reading for little learners.

Corresponding lessons on SchoolhouseTeachers.com; access to the Internet, computer, and printer; 3-ring binder to store materials

Course Outline for Our ABC With ME Homeschool Language Arts Course

Course Sample for Our ABC With ME Homeschool Language Arts Course

A is for Abraham Lincoln

Born in a log cabin,
His schooling rare and poor,
To succeed in his life
He knew he needed more.

The day Lincoln was born is celebrated as a state holiday, in some states. He was known as the Great Emancipator.

Lincoln lived on a farm on the frontier. He became good at using an axe. His first job was cutting logs. As he had little time for fun and school, his education was just a few weeks during the winter months. Altogether he had about two years of schooling.

He was a determined young man and knew he needed some schooling to be a success. So he decided to educate himself. He read whatever he could find on the frontier. There weren’t many books there, so he read the Bible a lot. He wrote his math problems on a wooden board. Always, he thought ideas through until he could understand them forward and backward.

Lincoln’s friends pushed him to run for a government job. To prepare for the job, he studied books on law. In 1836, he passed the bar exam and gained the respect of more experienced lawyers. Finally, one asked him to join his office in Springfield, Illinois. In 1861, he ran for president and was elected.

Lincoln was one of the most popular presidents. He was the first president with a beard. He stood 6 feet 4 inches tall and wore a size 12 to 14 shoe.

Abraham Lincoln’s hat was made of beaver fur. He carried important documents in a secret lining inside his hat. He also wore it when he made speeches.

One of his speeches, the Gettysburg Address, was given on November 19, 1863. It is the most quoted speech in history. It is 272 words long and about two minutes in length.

During his presidency, Lincoln created the Secret Service, helped begin the Republican Party, and made Thanksgiving a holiday on October 3, 1863.

His image is on more than fifty postage stamps, and his head has been on the penny since 1909 and the five-dollar bill since 1928.

Mr. Lincoln’s Whiskers by Karen B. Winnick This is a true story about a little girl who wrote a letter to Abraham Lincoln, asking him to grow a beard. She told him the beard would help him to get elected President of the United States of America.

Thank You Sarah: The Woman Who Saved Thanksgiving by Laurie Halse Anderson This is the true story about Sarah Hale writing to Abraham Lincoln asking for Thanksgiving to become a holiday.

More About Our ABC With ME Homeschool Language Arts Course

The ABC with ME curriculum is a fun weekly series that helps young children learn their letters . . . and so much more! ABC with ME works through each letter of the alphabet one theme at a time! History is the first theme, starting with A is for Abraham Lincoln and working all the way to Z is for Zachary Taylor. Each week’s homeschool language arts lessons include a short poem, some fun facts, links to related activities, and an additional reading list. PLUS, there is a bonus coloring book with copywork to wrap up the history theme. 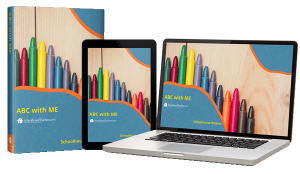 Would you like to tell others about this ABC With ME homeschool language arts course?

ABC What Will I Be?

Around the World with Stories

Preschool in a Box