Print a Certificate of Completion

Welcome to Our All About Careers Homeschool Social Studies Course

Getting Started with Our All About Careers Homeschool Social Studies Course

In All About Careers, students have the opportunity for an in-depth study of eleven careers in various fields. Through fun activities, text, projects, and the experiences of professionals shared in the text, elementary and middle school homeschool students can get a glimpse of possible career choices and ideas for many more to investigate.

Corresponding lessons on SchoolhouseTeachers.com; journal for notetaking and research

Course Outline for Our All About Careers Homeschool Social Studies Course

Course Sample for Our All About Careers Homeschool Social Studies Course

My Life as a Veterinarian

Hi! My name is Dr. Brad Christensen, and I am a veterinarian. I grew up in rural Wyoming where large animals were an important part of our lives. The people living around us were ranchers, and since my father is also a veterinarian, I spent a lot of time working alongside our neighbors as they cared for cattle, horses, and sheep. You can say I’ve been around animals my whole life. For example, in the Dakotas, llamas are commonly used to herd sheep. They take really good care of the sheep and will courageously chase away coyotes! You can imagine how helpful llamas are to sheep farmers. These valued animals work alongside the farmers and are given regular medical care. I was able to care for many of them and alpacas, too, while I was at school. 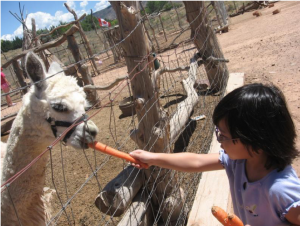 Figure 1. This child is feeding a baby llama some carrots. This llama will grow up and be a working llama some day.

Have you ever seen bison? These mammals have a thick, wooly coat which means they’re better suited for cold-weather climates. Bison1 are big and can weigh between 1,500 and 2,200 pounds. In addition to that heft, they are wild and dangerous and strong. They’ll charge right through a fence or ram a truck! Well, Canadian ranchers, who keep big herds of bison just as we do cattle, had bought a herd from Wyoming (my home state).2 My father was hired to test the animals prior to sending them across the Canadian/American border, in large part, because we owned a big rodeo arena which the ranchers planned to keep the herd of bison in. They had to stay about three or four days to allow us to get all the work done, and the entire time, a full-time welder was there repairing the fences the bison kept destroying! My father and I drew blood from these animals for testing and vaccinated3 all of them as fast as we could. Even though bison are called domestic4 animals, they are still pretty wild! 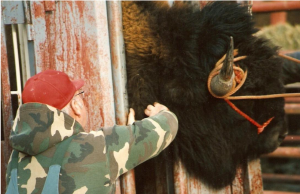 Figure 2. Here is my father, working on a bison. Can you see how the horns are tied with rope? The bison must be still while the small amount of blood for the test is drawn. This doesn’t hurt him but rather keeps him from getting scared and hurting himself or my dad. Only a little bit of blood is drawn for tests. It won’t hurt him at all.

Right now, I work in the city as a small-animal veterinarian. My average day consists of examining pets and giving vaccines to little puppies and kittens. I deliver baby animals, and when they’re born, we rub them with towels, suction liquid out of their throats, and help them start to nurse milk from their mothers. I also perform spay and neuter surgery,5 fix broken bones, deal with illness, and manage the animal hospital where sick pets are on IVs6 and need liquid medications and sometimes X-rays. 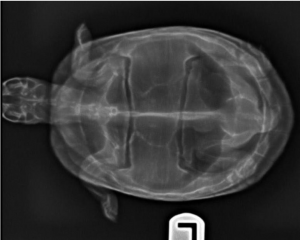 Figure 3. This is an X-ray of a turtle. A turtle’s top shell is called a “carapace,” and its lower shell is called a “plastron.” The X-ray allows us to see what is going on inside the turtle without hurting him. Turtles are reptiles and lay eggs.

More About Our All About Careers Homeschool Social Studies Course

“What do you want to be when you grow up?” Children ponder this question repeatedly over the course of childhood. A child relates to father or mother, grandparents, friends, neighbors—everyone around them has something they specialize in and do. Through playful activities, children emulate the grownups around them—trying on different hats and shoes—whether they be of fireman, farmer, foreman, or flight attendant. God has designed each child with unique gifts and talents for a purpose that will one day unfold before their eyes. Someday—and soon enough—a parent looks at the child and realizes he or she is all grown up!

The All About Careers homeschool social studies course provides a wonderful opportunity for homeschool parents to guide children toward a richer understanding of the world around them and to take advantage of their delight-directed interest in the subjects presented. Ideal for homeschool students ages 4-10, older students and even Mom and Dad can learn right alongside them about several special callings that people pursue and love. This is not just a wafting of information, but an in-depth study that has been thoroughly researched and introduced along with engaging text, fun activities, and special learning adventures and ideas for further creative exploration.

All lessons aid parents in the process of mentoring their children to become what God desires for them by discovering and encouraging each child’s uniqueness and individuality through these hands-on studies. This could be the spark that ignites the fire of interest for a child—and who knows what path it may take! 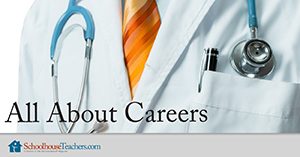 Would you like to tell others about this All About Careers homeschool social studies course?