You’ve heard of Russia and Brazil. What about Moldova and Swaziland? This course will travel the globe, from continent to continent, providing a brief glimpse of the culture present within each country on that continent, with an opportunity for further research to enrich the student’s understanding of the world around them. From population and languages to religion and holidays, there is an abundance of facts to learn about each stop along the way.

Corresponding lessons on SchoolhouseTeachers.com; journal for note-taking and research

Go to Class Lessons and choose which unit you’re going to start with. Download the lesson plan and lessons. Follow the instructions each day on the lesson plans and mark them off when completed. Be sure to write any needed homework in your notebook.

Using the information from the link, provide the correct answers below.

By fraction, what is the number of people who live in the capital city and its suburbs? _____

Most people live in (urban/rural) areas.

Argentina is especially known for its excellent quality of __________ (type of meat).

Six continents . . . countless cultures. This course will provide students the opportunity to catch a glimpse into other cultures by using the World Book Online resources. Learn what makes each country unique, including pastimes, favorite foods, religion, population, ethnic groups, geography, languages spoken, holidays, music, and more. Students are provided with activities and essays for further research. 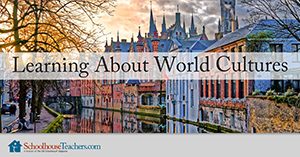 Would you like to tell others about our Learning About World Cultures Homeschool Social Studies course?

April Durham is a Carolina Girl, through and through. She holds a bachelor’s degree in Sociology…

Rebecca Wilson is a native of Oklahoma. She received her B.A. in English and Master of Education…

Citizenship Around the World

Elections in the US Presidency