Welcome to Our Checks and Balances Homeschool Social Studies Course

Getting Started with Our Checks and Balances Homeschool Social Studies Course

Checks and Balances is a four-week mini-course that introduces the responsibilities of a government and its citizens. Checks and Balances homeschool social studies lessons use text, activities, puzzles, and copywork to teach about the branches of government, the Electoral College, and more.

Corresponding lessons on SchoolhouseTeachers.com; journal for notetaking and research.

Lesson One: Government and the Executive Branch

What is a government? Let’s take a look at the definition of government. Oh, not in today’s dictionary. Let’s travel back in history and use Noah Webster’s American Dictionary of the English Language, 1828:

Government, n. Direction; regulation. These precepts will serve for the government of our conduct.

Let’s discuss some of the great principles found in these definitions.

“The most perfect maxims and examples for regulating your social conduct and domestic economy, as well as the best rules of morality and religion, are to be found in the Bible . . . The moral principles and precepts found in the scriptures ought to form the basis of all our civil constitutions and laws. These principles and precepts have truth, immutable truth, for their foundation . . . All the evils which men suffer from vice, crime, ambition, injustice, oppression, slavery and war, proceed from their despising or neglecting the precepts contained in the Bible . . . For instruction then in social, religious and civil duties resort to the Scriptures for the best precepts.” – Noah Webster

More About Our Checks and Balances Homeschool Social Studies Course

What is a government? What are the responsibilities of different levels of government? How does the U.S. put leaders in place? What is the Electoral College? Elementary and middle school students discover the answers to these questions and more as they work their way through this Checks and Balances homeschool social studies course. 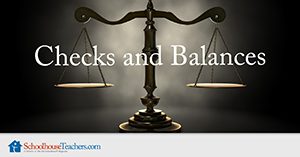 Would you like to tell others about this Checks and Balances homeschool social studies course?