Getting Started with Our Crafting Fiction Homeschool Language Arts Course

This Crafting Fiction homeschool language arts course helps a student capture the story in their head and put it down on paper. Through bite-size assignments, the language arts lessons take the fear out of writing a fictional story and guide homeschool students through the process of writing, one step at a time.

Corresponding lessons on SchoolhouseTeachers.com; access to the Internet, computer and printer; 3-ring binder for notetaking and assignments.

Twenty-one bite-size Crafting Fiction homeschool language arts lessons guide students through the process of writing, one step at a time.

In this homeschool language arts course, we’re going to write fiction narratives. A narrative is simply a story, and most stories share some basic elements that we will cover as you begin to put together your own story.

Every story is about at least one person, a character. Interesting characters don’t have to be super mysterious or from another time period or world. In fact, some of the most interesting characters could be based upon people you’ve met during your life. The elderly lady who works as a cashier at the grocery store. The man who sells balloons at the fair. The teenage girl who works at a local ice cream shop. The middle-aged man who spends hours working in his garden.

Stories can and usually do have more than one character, but if you look carefully, they often have one main character. This character should have a problem (the conflict) that needs to be solved (we’ll get into conflict later), and by the end of the story, the main character should usually change or grow somehow, even if that change is to learn something.

But before we jump too far ahead, I want you to come up with some of your own characters. To come up with characters, start by considering what you know. However, because we’re going to be working with fiction, don’t come up with a character that is exactly like someone you know. Branch out a little and be creative.

Answer the following questions about yourself to help you think of some characters:

From choosing characters to planning their dilemmas and setting them in scenes, writing a fictional story is not nearly as intimidating as it sounds, especially with this Crafting Fiction homeschool language arts course! Through text-based lessons and short assignments, students discover the steps to writing a good fictional story and make progress on those ideas that have been swirling around in their heads for far too long. 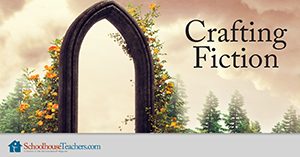 Would you like to tell others about this Crafting Fiction homeschool language arts  course?

Having grown up writing stories in makeshift journals and on her father’s typewriter, Jennifer Miller now…