Let’s review some of the literary terms that you will need to be familiar with for this course.

Protagonist: A protagonist is the central character or leading figure in poetry, narrative, novel, or any other story. A protagonist is sometimes called a “hero” by the audience or readers. Aprotagonist generally experiences some sort of change or transformation in his or her character throughout the story.

Antagonist: The antagonist is the opposing force in a story. It could be a human enemy, or it could be non-human, like an animal, or something less tangible, like fear. The antagonist plays an important role in story development. Think about a favorite movie you like to watch. If there is conflict in a story or movie, it is because there is some sort of antagonist. The protagonist in the story is seeking resolution; the antagonist resists such resolution, but all good stories need antagonists.

Conflict: A problem or struggle between the protagonist and antagonist. Without conflict, there is no plot.

Theme: The main idea of a story or the point an author wants to make. In literature, the theme is not usually directly stated but is inferred. Artists and authors use details, character, point of view, and setting to communicate a theme.

Character: A person (or animal with human characteristics) in a literary work. Characters can be described physically, intellectually, emotionally, socially, and philosophically.

Point of View: The attitude or outlook of the narrator or character(s).

Plot: The action that makes up the story. Plot is the sequence or order of events that take place in a story.

Setting: The location of a story or work of art in time and space. The setting may be a time in history, a geographical place, or an imaginary location.

Mood: The feeling that the author tries to convey throughout the story; the atmosphere or emotional condition created by the piece, within the setting.

For practice, take a book that you are either reading now or have read in the past and are very familiar with, and try to identify the protagonist, antagonist, climax, conflict, theme, character, point of view, plot, setting, and mood of the story. Some may have more than one answer, such as conflict, setting, etc.

The African American Literature homeschool language arts course explores the literary traditions of African American literature through poetry, short stories, essays, drama, journals, and other written forms. Homeschool high school students engage in a variety of learning experiences through various audio/visual resources and multimedia technologies designed to cultivate an understanding of the themes of African American literature. Moreover, each student records experience with the homeschool language arts course materials in a creative journal, a project that is limited only by the imaginative faculties of the individual student.

Please note: a wide variety of works are studied in this course. Parents are encouraged to explore the course before sharing it with their students, as not all topics in all readings are suitable for all students.

If this African American Literature homeschool language arts course is taken in full, completing all reading and writing assignments, the course is worth a minimum of .5 language arts credit. If the homeschool high school student spends approximately 180 hours exploring this course in depth (two hours per day for eighteen weeks or one hour per day for thirty-six weeks), it is worth one high school credit in language arts. As always, please check your own state’s academic requirements. 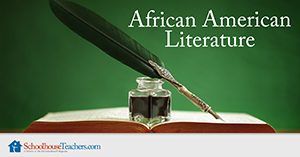 Would you like to tell others about our African American Literature homeschool Language Arts course?

Bethanie Frank is a wife and homeschooling mom. She has taught college, high school, and middle…