Getting Started with Our Homeschool Language Arts Literature Course

Content for this homeschool language arts literature course has been provided by Adam Andrews, Director of the Center for Literary Education. The lessons provide questions (and possible answers) to make this an interactive language arts course between the parent and the homeschool student, including discussion about setting, plot, theme, characters, literary techniques, motive, and more. Each literature book can be studied independently, and the books can be done in any order to fit the needs of individual homeschool students. Story charts are provided for each book, some filled in and some blank for the student to complete. An assortment of books are provided for grades K-12.

Corresponding lessons on SchoolhouseTeachers.com; a copy of the book you have chosen

Go to Class Lessons and download the lesson plan and lesson file. Work your way through the lesson content for the book you’ve chosen, then fill out the page from the lesson plan for each book you read.

Books do not need to be studied in order (See How to Use This Course). Grade levels marked are just a guide and can be adjusted as best fits your student’s needs. Even though the grade levels represent the average appropriate reading level for the book, discussions and extension activities can always make the book meet the demands of the grade level expectations. One of the goals of this type of discussion questions is to teach students how to critically analyze any story, including children’s books.

The Voyage of the Dawn Treader
by C. S. Lewis

(1) Where does the story happen?

This story begins in a dingy flat in Cambridge, where the two youngest Pevensies, Edmund and Lucy, are staying with their cousin Eustace and their aunt and uncle just a few years after the events of The Lion, the Witch and the Wardrobe. The atmosphere of the Scrubb house is regimented, austere, and cold. The Scrubb family match their dwelling to perfection; they are equally cold and orderly and uninviting. As with all the other Chronicles however, this dingy setting is merely a frame for the real story, which takes place in Narnia itself.

Within the Narnian setting, there are multiple settings. Charting this story becomes rather a challenge when one realizes that this story is episodic in nature. Though there is an over-arching simple plot driving the story along, Lewis has also included individual stories for each of the protagonists within that greater story. As a result, each island which the characters visit in their journey acts as a separate setting for a mini-story, complete with individual conflict and climax. In order to chart this story on a plot chart, readers must be aware of the duality of this plot.

Truthfully, one could chart both the over-arching plot wherein all the characters follow Prince Caspian in his quest to find the seven lost lords and the individual plots which focus more specifically on the personal conflicts and character flaws of the members of Caspian’s group. We will adopt this approach in this study guide. First, we will chart the greater, external plot of the quest and second, we will touch on the individual conflicts and climaxes of the essential characters.

To neglect either of these charts would do violence to Lewis’s work, for he has, very intentionally, constructed a surface story and layered deeper stories beneath that surface plot that contain the theological discussions Lewis cherishes. It is in these layered tales that Lewis dissects human nature and discusses the theological import of relationships between creatures and their creator. As a result, simply charting the grand plot plunders the story of its depth.

In this literature course, Adam Andrews shares some powerful techniques for reading comprehension and literary analysis to use with students of all ages, from kindergarten through high school. Great literature books are explored—some written for adults, some for the smallest children—and homeschool parents are shown how the same key questions can be asked of each one. Using these questions can generate a powerful discussion almost automatically. The results may be amazing!

The homeschool language arts literature lessons posted here are not designed to be used by the student as daily worksheets; rather, they are created to facilitate periodic (weekly or even daily) discussions between teacher and student. It’s this simple:

Mr. Andrews includes story charts with these lessons but cautions that while the charts are helpful for organizing and capturing the main elements, they are not to be used as assignments in a strict sense, or subjected to rigid grading. Instead, the idea is to plot the main elements, leading to open discussion on the work and a chance to interact with the story as a complete work of art.

He also cautions, beware: fill-in-the-blank exercises may actually hinder a student from understanding literature! The goal of literary analysis is to interact with a story as a complete work of art, to understand its themes and carry on a “conversation” with its author. At The Center for Literature, Mr. Andrews has found that worksheets rarely contribute to such understanding. On the contrary, they often bore and frustrate even the most willing students. Happy Reading! 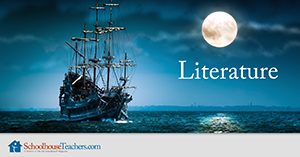 Would you like to tell others about this homeschool language arts literature course?

Adam Andrews is the Director of the Center for Literary Education, centerforlit.com. He received his BA…